The History of the Salt Plant

The Salt Plant in Prešov is a national cultural monument and is considered to be one of the most important technical monuments in Slovakia. It is a unique complex of technical objects dating from the 17th century used for pumping and cooking salt from brine. The facilities for the rock salt mining and the brine extraction in the Salt Plant include, in particular, the Leopold shaft, a brine storage (here known as četerňa), a smelter, a brewery, a salt warehouse (chambers), a blacksmith’s workshops and a tower (here known as turňa). 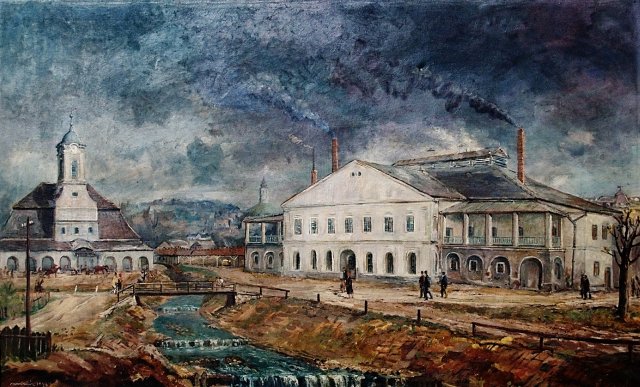 The Leopold Shaft was a central piece of work that should be considered the oldest. It began to be sunk in 1571. Essentially, it is a 155 meter deep pit, which was originally called The Imperial Shaft. In 1674 the building of the gin was built above it. The object itself as well as the mechanism required serious repairs (the first one in 1807, the second one in 1844). The mechanism was rotated by four pairs of horses. The brine was pumped in a leather sack of 5-7 hectolitres. The gin in the Salt Plant was one of the largest in Central Europe.

The containers for the brine storage were built in 1815. There are eight wooden tanks on the stone bases containing 1 320 hectolitres, a total of 10 560 hectolitres. All the tanks formed a single unit and were placed under one roof, structurally adapted to the terrain. The brine was delivered into the containers from an unturbidity bin by a wooden pipe from the Leopold shaft. From the lowest situated tank, placed at the terrain level of the brine storage, the brine was delivered to the preheating basin, and then to the evaporation basin.

At the turn of the 18th and 19th century the two breweries František and Ferdinand were built (demolished in 1931). The František brewery has not been preserved in its original form. It burned to the ground during the fire in 1819. The brine was delivered into the evaporating basin. The crystalline salt was excavated and transferred to drip chambers, where the salt was left for about 24 hours. It was transferred to drying rooms by wooden drains and after 8 or more hours it was then transferred to a warehouse or dispatched elsewhere.

The salt was transported from the brewery to the warehouse on rails in small wooden carts. The salt warehouse in its original form was completed around 1825. In fact, it was the most architecturally impressive building in the entire complex. It burned down on May 18, 1986. The inimitable bolted wooden truss structure burned down.

The original complex of the former basin Salt Plant was accompanied by other buildings, such as salt baths, engine room, depot and others. Basically, these are only buildings without the appropriate technical equipment and basic inventory. For the sake of completeness, the tower (turňa) has to be mentioned – the bell tower, which in older times served as a signal for various activities in towns. It is built on a hill – bank. By knocking on the board, it was announced to the miners, resp. employees of the state company the beginning of working hours and other significant events, breaking news or incidents (natural disasters). The tower ended its role after the First World War.

In 2016, in the national cultural monument Solivar a building was opened to the general public – a salt warehouse, which became a ruin since the fire in 1986. It no longer serves its original purpose, which was salt storage and distribution, but it becomes an interesting functional space with multiple ways of its use. The reconstructed building houses the largest historically rare central hall, which leads to the individual premises – the former salt chambers. These are divided into a museum part, a congress area and an economic part, which is assigned for office, catering and hygienic spaces. The warehouse tower, which is dominated by a functional clock and a bell, was also restored.

The area of the salt plant “The Old Salt Plant” from the turn of the 18th and 19th centuries has been preserved as a unique technical monument, which has no competitor in the field of technical monuments of a similar kind in Slovakia. We owe the construction and prosperity of this factory to a large extent to the government and business strategy of the Habsburgs. It was built with the help of imperial experts and the work skills and perseverance of the local population.

Increasing demand for salt constantly forced the plant management to address the issue of increasing the plant’s production capacity. After futile attempts to modernize the old salt plant (František and Ferdinand breweries) did not increase the production capacity and the production remained at about 6,000 tons of salt per year. The modern history of saltworks in Slovakia begins with the construction of a new state salt plant called “President Masaryk”. The construction of the factory lasted from 1921 to 1925 and the plant was put into operation on March 7, 1925. The production capacity was set at 12,000 tonnes of table salt per year in a continuous 24-hour operation.

Further reconstructions, modernizations, automation and many innovations in the plant led to the expansion of the range of manufactured products. The overall benefit of these measures was an increase in production capacity to 24,000 tonnes of salt per year, which increased further to 45,000 tonnes with a later increase in intensity.

An important measure was the purchase of a new fully automatic machine for packing 1 kg of salt in 1980, which was connected to 24-hour continuous operation with an annual capacity of 32,000 tons of salt in 1 kg packages. By automating and completing the packaging line for 50 kg of salt bags, the entire production process took place without the intervention of a human factor. A further increase in production and range of products in 1995, ensured by new technology and equipment, made it possible to increase salt production to 90,000 tons of salt per year.

In 1959, a salt reservoir was discovered in Zbudza municipality near Michalovce District while searching for natural gas. A later geological survey revealed that this was a larger salt reservoir with higher quality of salt than in The Salt Plant in Prešov (the salt reservoir reached up to 1 billion tons of salt). In the years 1993 to 1994, preliminary projects for the construction of a new mining and processing factory were prepared by the Salt Plant in Prešov. The aim of the investment was to achieve the salt extraction in the amount of up to 300 thousand tons of salt per year. The investment in the new mining and the construction of a new factory covered by various loans proved to be insufficient in the following years and its total value increased.

In 1998, The Salt Plant in Prešov ended in a loss due to an unfinished investment, got into a bad financial situation and the construction of the processing factory in Zbudza municipality was stopped. The Salt Plant, as an investor, was led to mutual litigation with the general contractor and the project manager. In 2002, the Novácke chemie závody company became the owner of The Salt Plant. The situation created by the bad investment did not resolve itself even after this owner change. Subsequently, Solivary a.s. Prešov (The Salt Plant Company) went bankrupt. On Saturday, May 16, 2009, the factory was definitively closed, 155 employees lost their jobs and salt mining in The Salt Plant was terminated. Technological equipment, which could still be used, was dismantled and removed from the production factory in Prešov, and other technological parts and structures were disposed of. The resumption of production at the factory in Prešov is more than unlikely owing to this reason, as well. Empty buildings are still standing as a fraction of the reminder of history and salt production in this region. The unoccupied salt market, which has been protected by a salt monopoly for centuries and which helped to build a salt factory, was not a problem to cover in today’s open economy. Back in 2009, an Austrian salt appeared on the Slovak market, packaged and sold under the Prešov brand (note: the registration mark was bought by the Austrian company).